A collective meditation on a well-kept secret 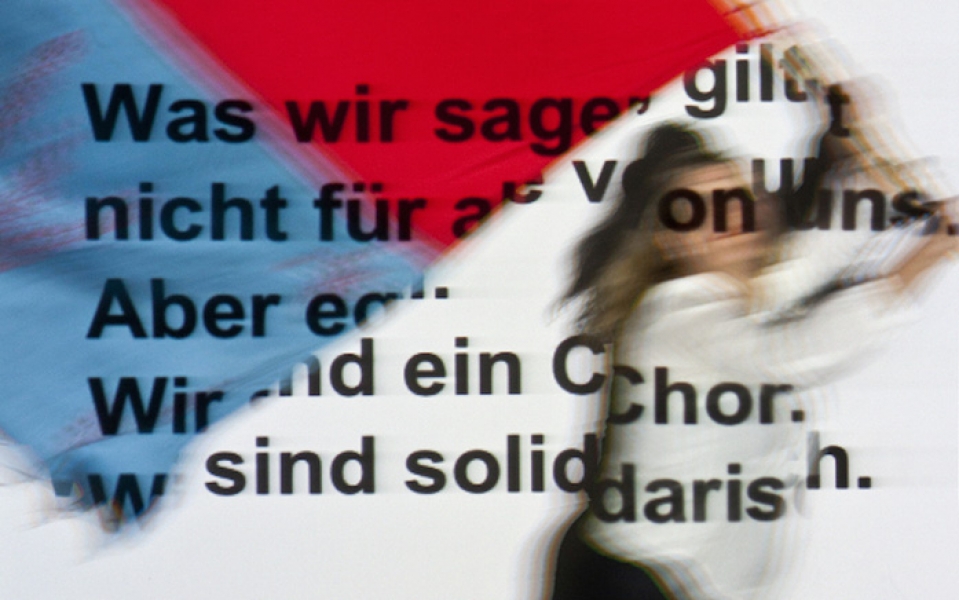 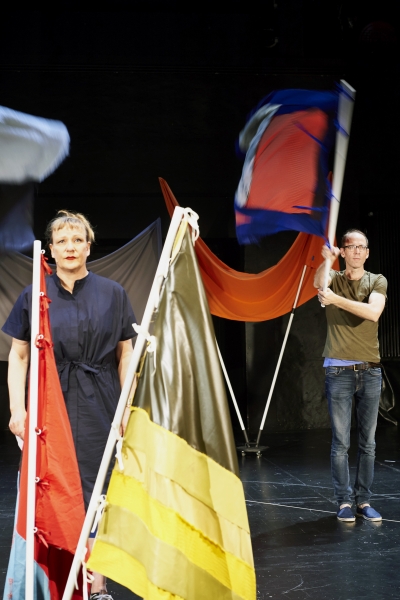 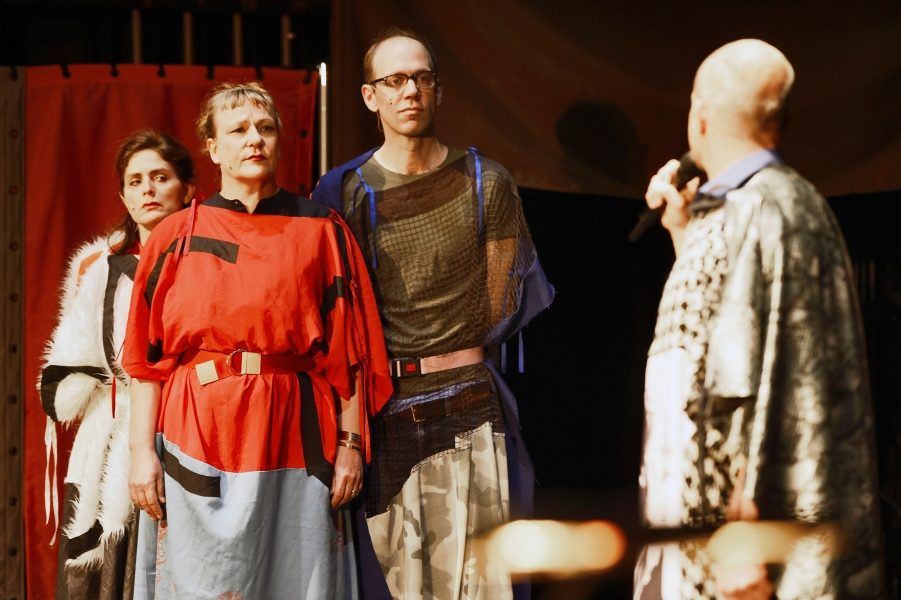 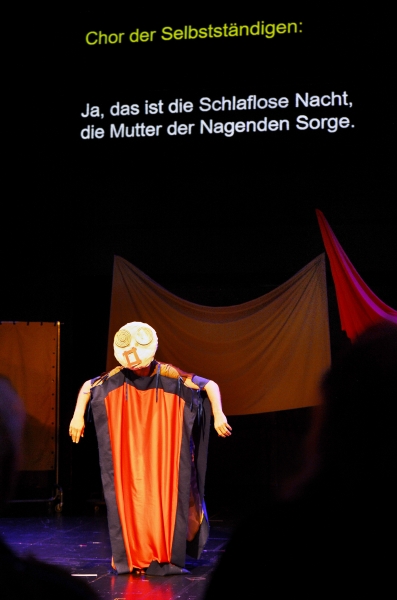 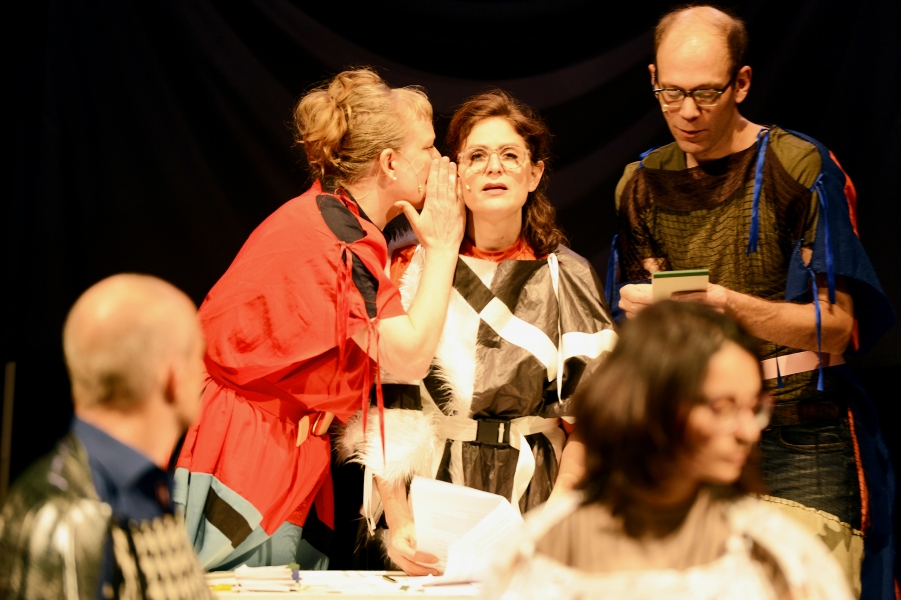 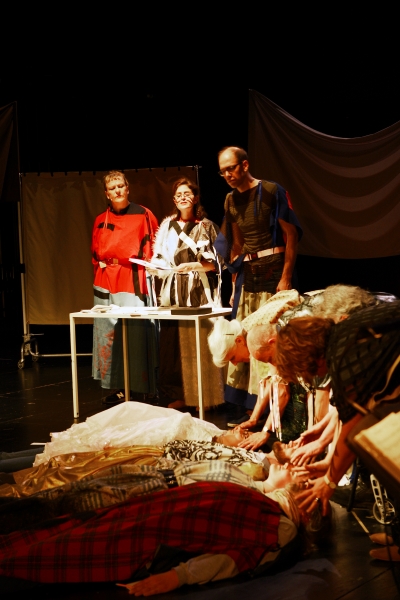 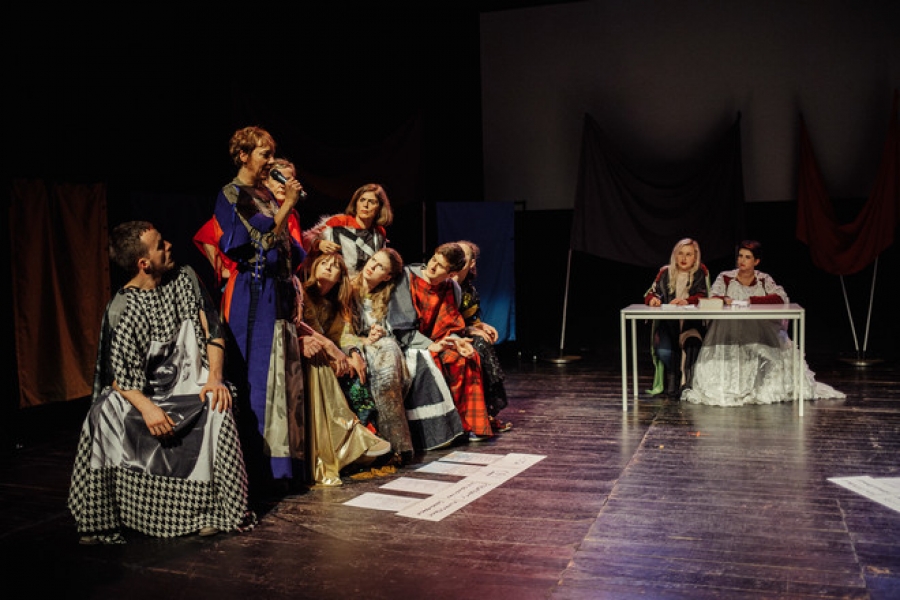 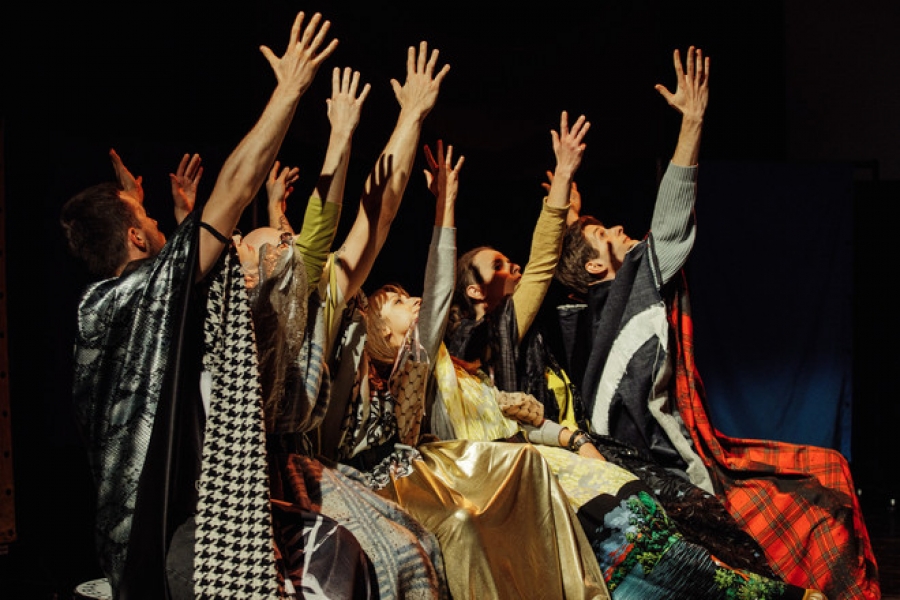 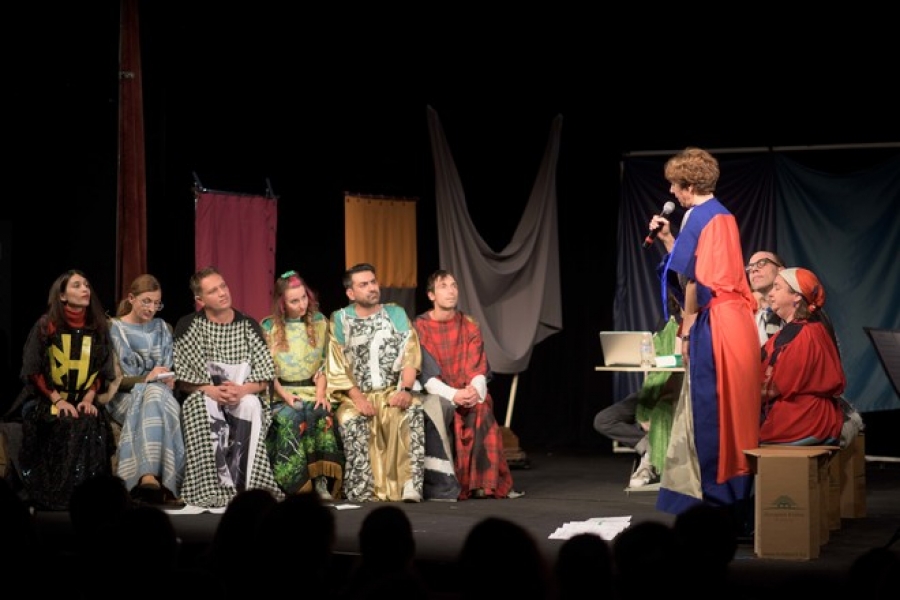 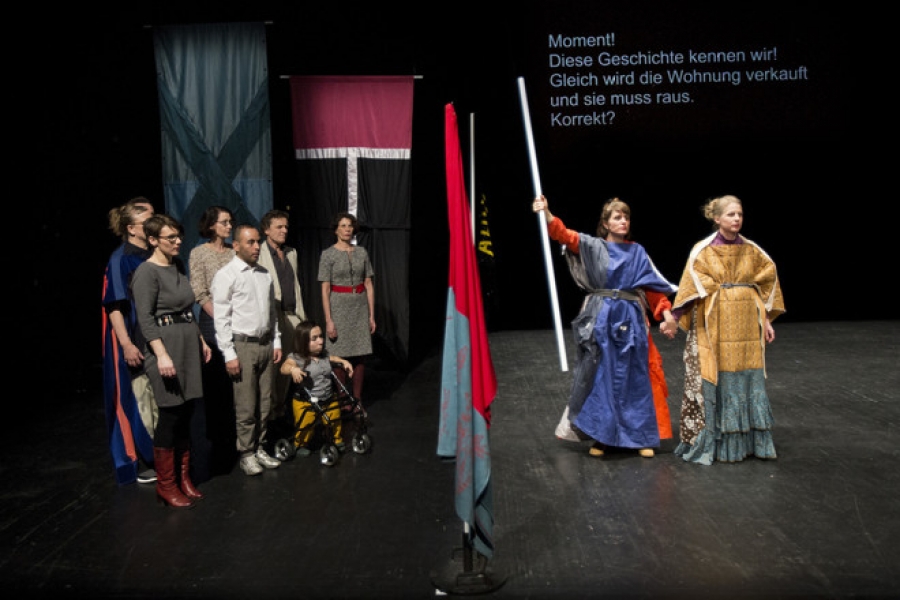 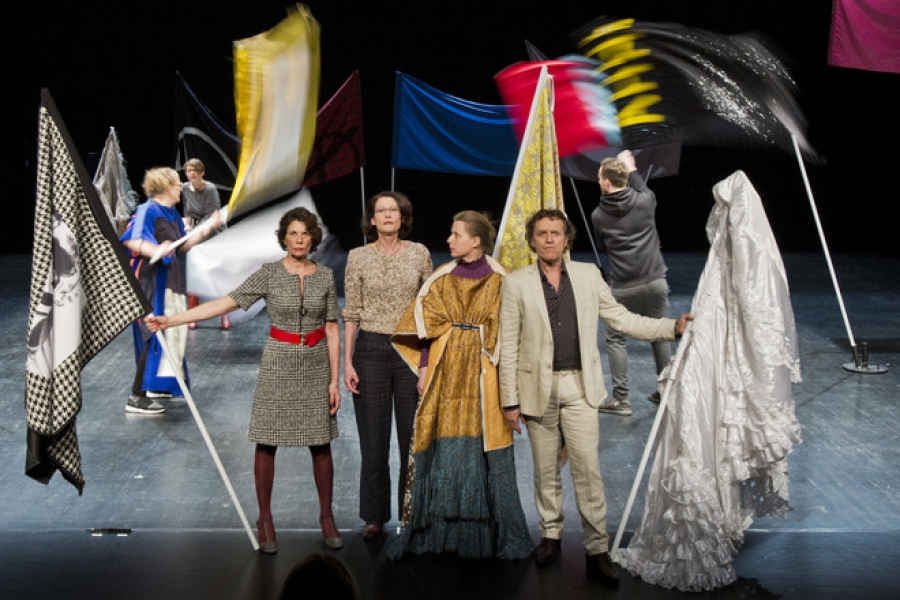 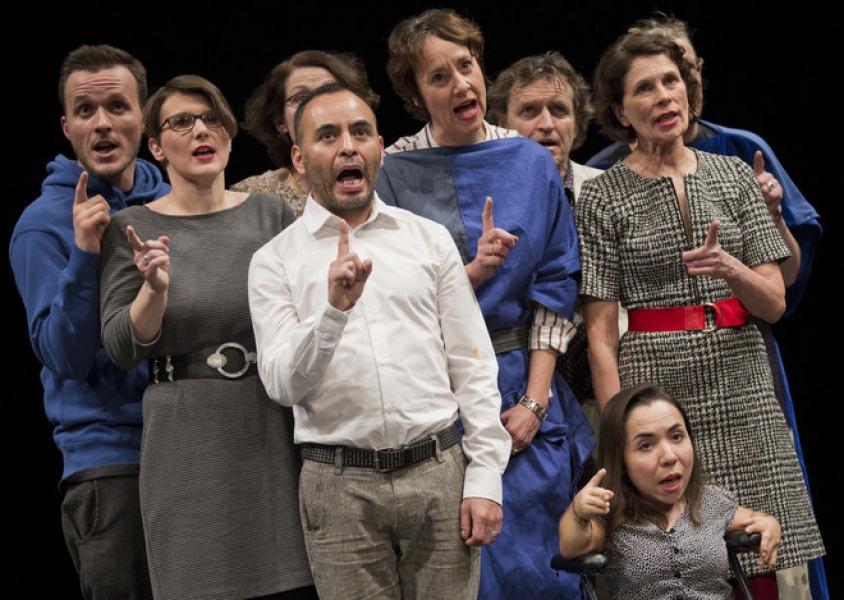 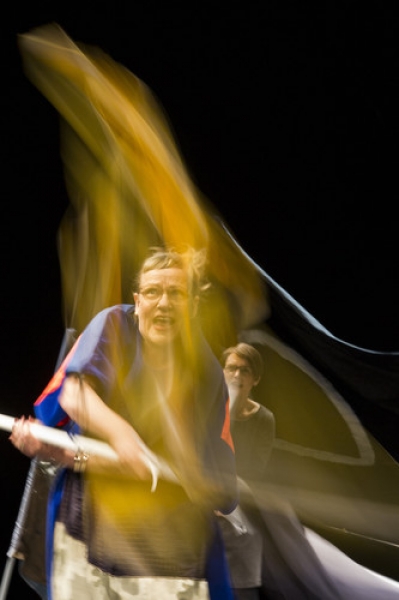 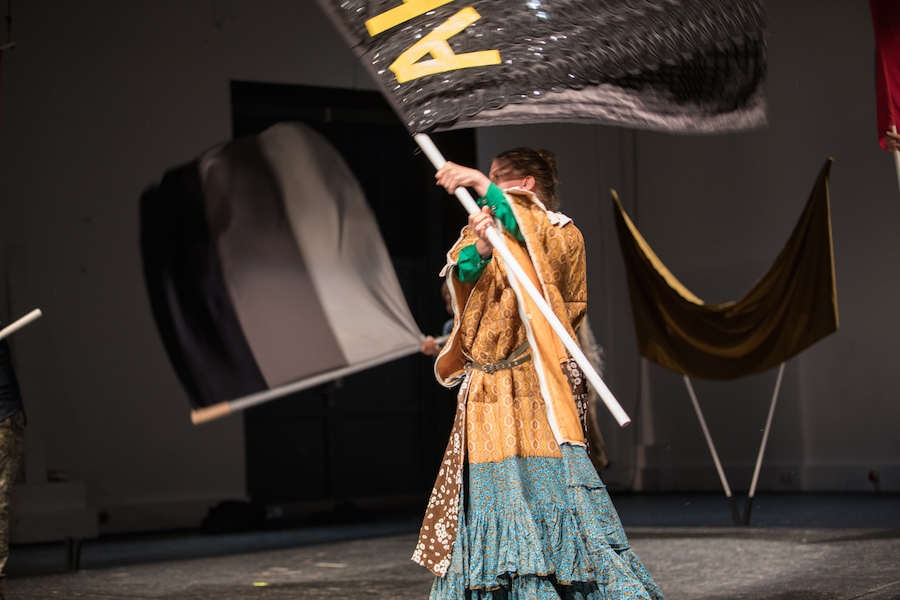 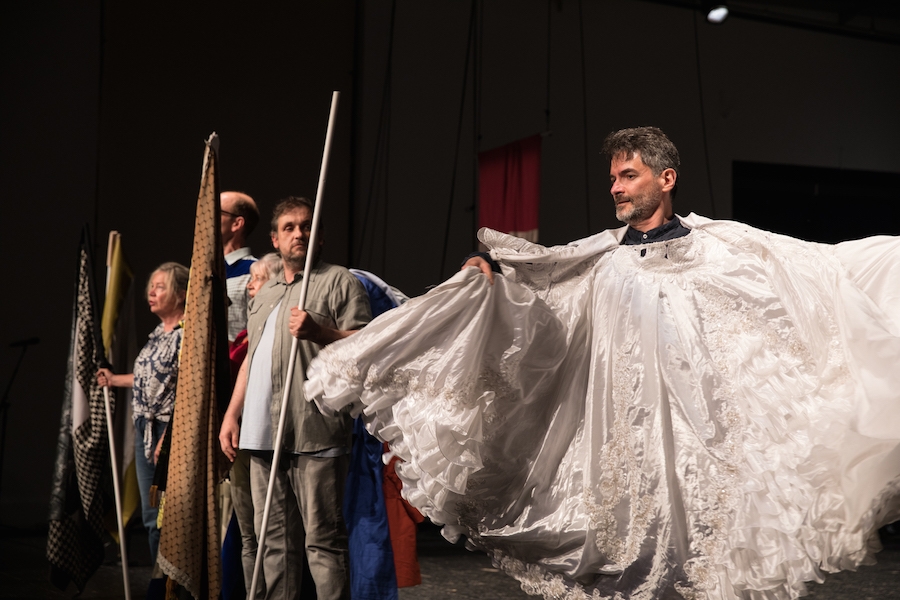 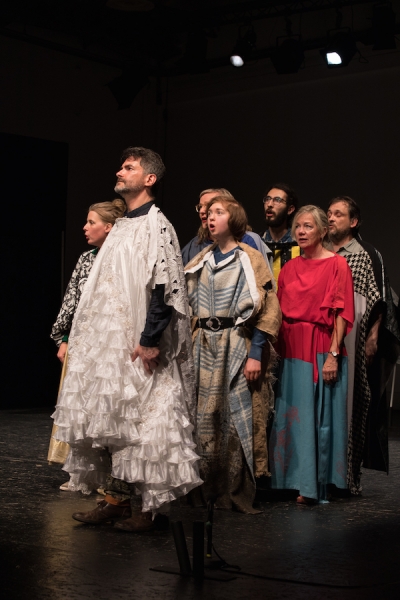 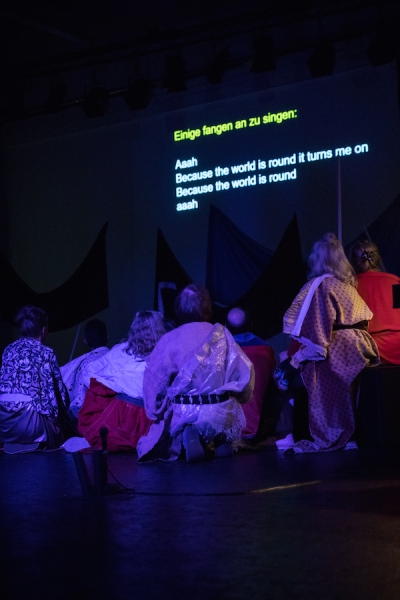 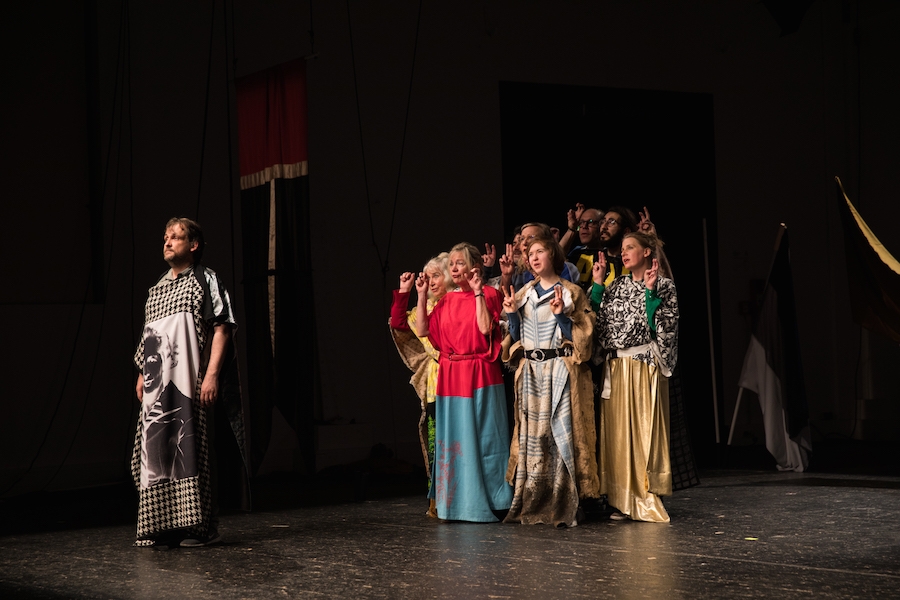 Property changes consciousness. It divides friends, grants power over others and excludes. Property is taken for granted. But it is not talked about. Yet nothing is as constitutive for our society or our coexistence; nothing has such a divisive effect on our community. With ORATORIO, She She Pop wants to air the secret of property, to drag it out onto a stage.
It is said that Western theatre began with the protagonist Thespis, who stepped out from the choir 2,500 years ago. But you could also say: it was the moment that the stage was privatised. Since then, the individual has been consistently overrated, overburdened and emotionally exploited. ORATORIO would like to shed some light on the context of the bourgeois public, property and democratic empowerment.
Together with each chorus of local delegates and their audience, She She Pop will start a discussion on property and examine their own relationship to ownership, the distribution of goods and its related problems. Inspired by Brecht’s Lehrstücktheorie, they develop rules for a dialogical theatre show and form discordant speaking choruses, which renegotiate with each performance how we deal with property. Who is allowed to speak? Who is present, who is represented? A collective monologue emerges from the diversity of voices, discord, and occasional, momentary harmony.
ORATORIO is a work-in-progress, which premiered in February 2018 at HAU Hebbel am Ufer in Berlin. First showings took place at Theaterformen 2017 in Hanover and sub- sequently also at the Konfrontacje Teatralne Festival in Lublin and the ACT Independent Theatre Festival Sofia. Finally ORATORIO returned from its tour through Europe, during which it gathered momentary impressions of other economic microcosms and evolved into a great polyphonic meditation at each stop along the way.

“Oratorio gives no answers – but many suggestions – as to how to progress and the choruses offer a guide to collective self-empowerment. So, that’s a good start!”
Andrej Holm, Nachtkritik, 13.05.19

All in all, “Oratorio” is a triumph of experimental performance: it democratises the space of the theatre to tap into a pressing public discourse, it blows up the concept of passive entertainment by highlighting our collective complicity in capitalistic property relations, and it delivers an inspiring show of solidarity in the process. But, aware of its own formal limitations, it ends on a self-critical, yet optimistic note. Question: what use is all of this? Answer: it’s a rehearsal for what’s to come. As the evening comes to a close and my neighbour and I return to our divergent economic realities, I feel that we both leave the theatre with a heightened sensibility for the nuances of property relations. And that’s a testament to a powerful, political performance. Bertie would approve.
Nicholas Potter, Theatertreffen-Blog 2019, 12.05.19

“It’s both the right place – here, in this city up for sale – and the right time to venture an experiment like this with the audience. The right topics – money, property privileges, power, values, community, expectations of theatre audiences – are brought up. The right questions are asked in light of the current situation of housing shortages, exploding rents, temporary employment contracts and exclusionary, right-shifting social structures. And this is the right way to ask them: humorously, not smugly and not with a disapproving undertone. In short: this is the right way to make theatre (collective, equal, de-hierarchised).”
Dilan Zuhal Capan, Theatertreffen-Blog 2019, 11.05.19

The production is at its strongest when it involves the audience, who speak and react to the texts on display in interaction with the performers. For example, when all the heirs are asked to say on stage what they will inherit and to add up the total sum of their inheritances. The time-honoured rule “Never talk about money” is rendered null and void, and the viewer becomes voyeur. When a man states that he is going to inherit a house with a garden in Sachsenhausen, a murmur goes through the audience: these Frankfurters know what his property is worth. “Oratorio” appeals to the moral responsibility of property-owners, but the production also reveals the contradictions of individual apartment owners, and so avoids one-sided moralising. By using the audience as a chorus, it shows that the distribution of property is not just a private matter, but a social one.”
Grete Götze, Frankfurter Rundschau, 03.09.2018

In “Oratorio” no political positions are stated; instead, the different actors illustrate different economic starting points. (…) In fact, this has an important role in the performance: for it is up to each individual to take part in the actions of the chorus and to alternate with the performers in texts projected and so, to out oneself. There is also something liturgical about this (…) from the protected space of the theatre (…), as indicated in the production’s subheading, what emerges is a meditation in which polyphonic groups and chants, the chorus of delegates as representatives of the social region, a chorus of heirs, but also individual voices are raised and bring up questions on the subject of property – well known ones, sometimes moralising, but always worth considering.
Badische Zeitung, 25.05. 2018

In general, “Oratorio” is highly entertaining from the very first second … not only because there are a few clever ideas that affect everyone on stage and in the gallery. But because nowadays one rarely experiences anyone, in cheerful severity, really trying to take Bertolt Brecht’s Lehrstücke as a model for form, word and music. Lehrstücke, because everyone can learn something, and because there is basically no audience. Which is why all those who took part in the three Frankfurt performances had no small part in the success of the choir.”
Eva-Maria Magel, FAZ, 03.09.2018

Reviews of the Premiere in Berlin, February 2018

“The surprise comes right at the beginning. Actually nothing at all has really happened yet on the dark, empty stage of HAU2. Just a text on the screen giving brief instructions. But they are so rousing that for a good ten fifteen minutes the audience is put in a mood that is otherwise familiar only from cabaret or carnival. Just let someone say that the supporters of the post-dramatic are theory-damaged, empathy-hating theatre sceptics.”
Doris Meierhenrich, Berliner Zeitung, 12.02.2018

Reviews of the Showing in Sofia, November 2017

„To claim that such a theatrical work leads to some sort of surprise or discovery, it would be inconsistent with its aims. It is not so much about the discovery of profound social contradictions, rather then targeting the ability of the theater to act on an individual, biographical level raising resemblance questions, which are otherwise mostly left in the hands of the media. In this way, the theater tries to preserve its freedom, distinguishing itself. So, in the general chorus of theatrical practices from the recent decades, She She Pop is certainly part it.“
Violeta Detcheva, “Kultura” magazine, 01.12.2017

“Oratorio”, at least for me, provoked on many levels feeling for awakening, for clarity, for uncompromisingness and truth. But most of all, it has proven the ever-growing need to articulate from the stage even the simplest and most obvious things that are actually the most difficult to define.”
Elena Angelova, portal “Kultura”, 01.12.2017

Reviews of the showing in Hannover, June 2017

“.. many things suggest  that “Oratorio” – after She She Pop’s success story “Testament” about inheritance – will be a similarly fine, self-deprecating show.”
Mounia Meiborg, Süddeutsche Zeitung, 15.06.2017

“… fundamental social questions, which could be thought-provoking. Nevertheless, the evening was not lacking in humour … ”
Kreiszeitung, 15.06.17