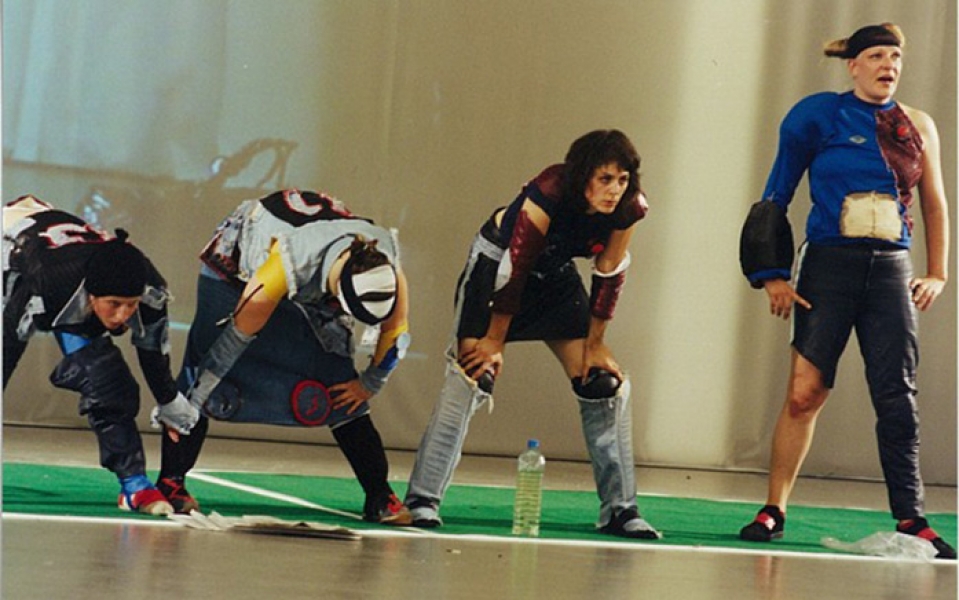 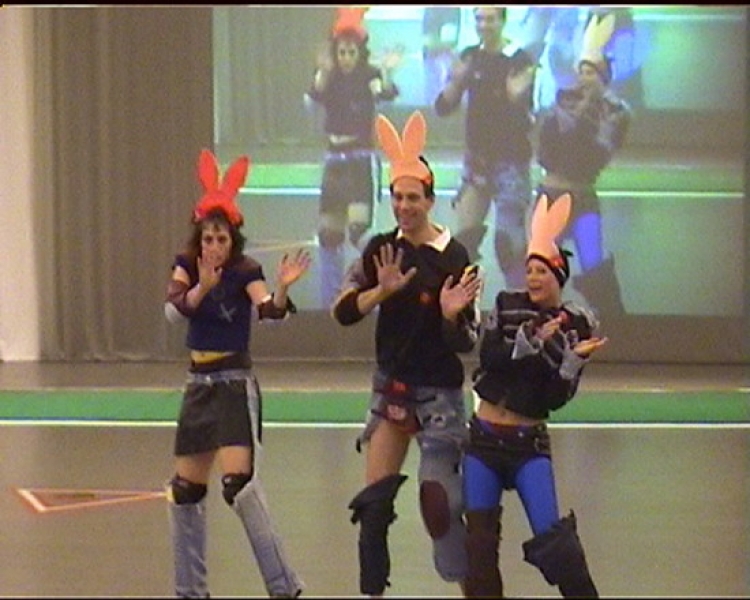 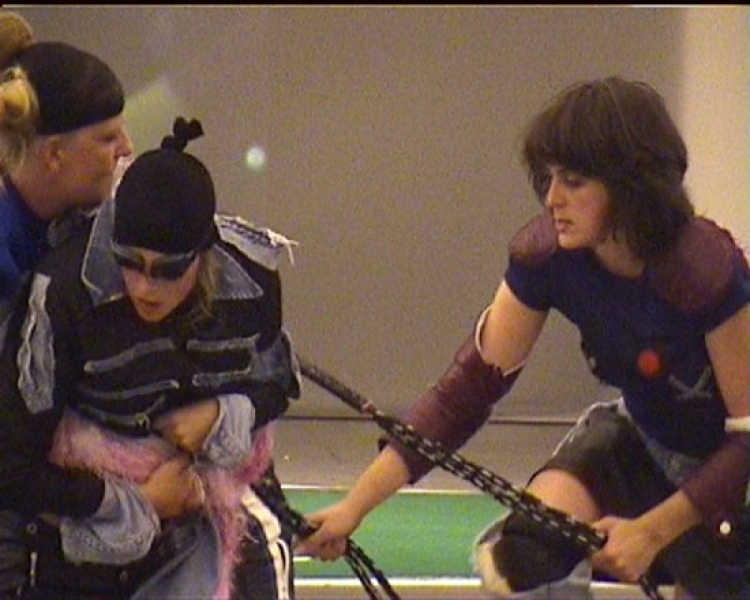 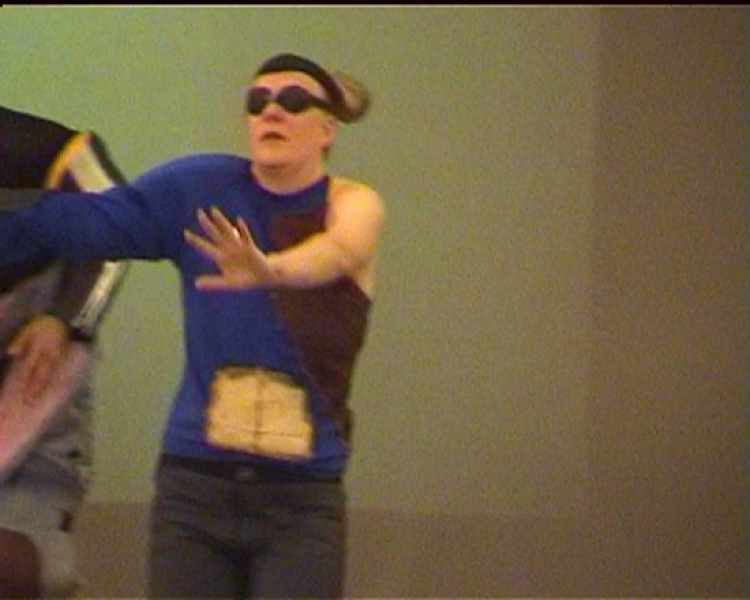 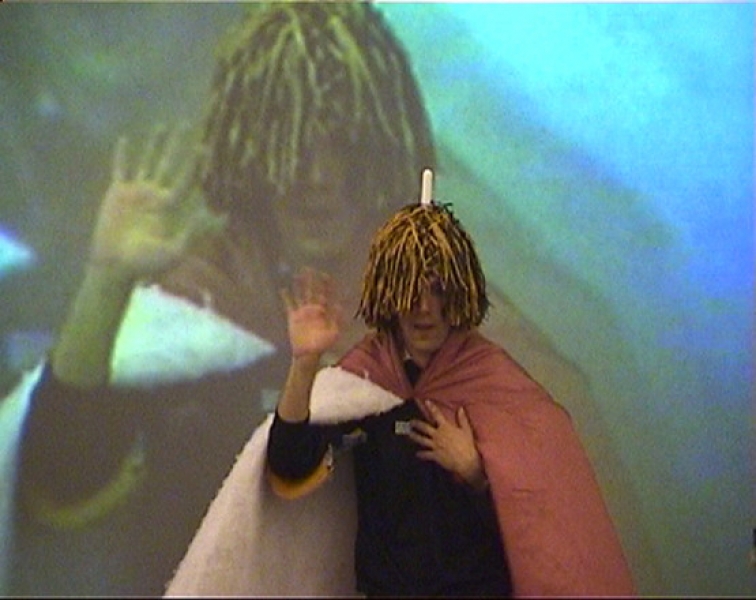 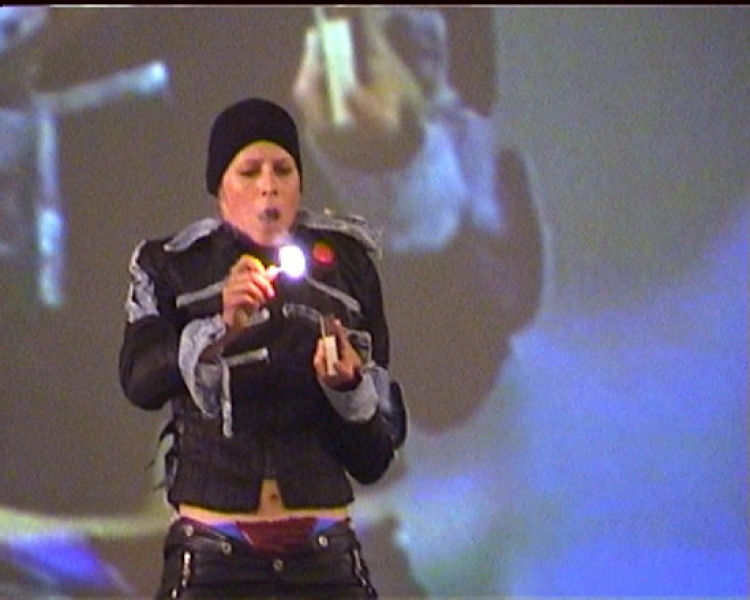 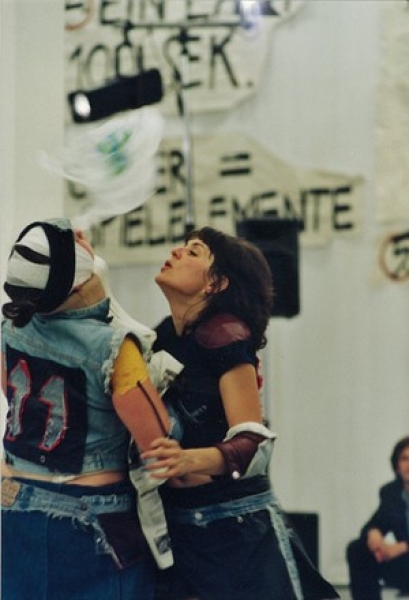 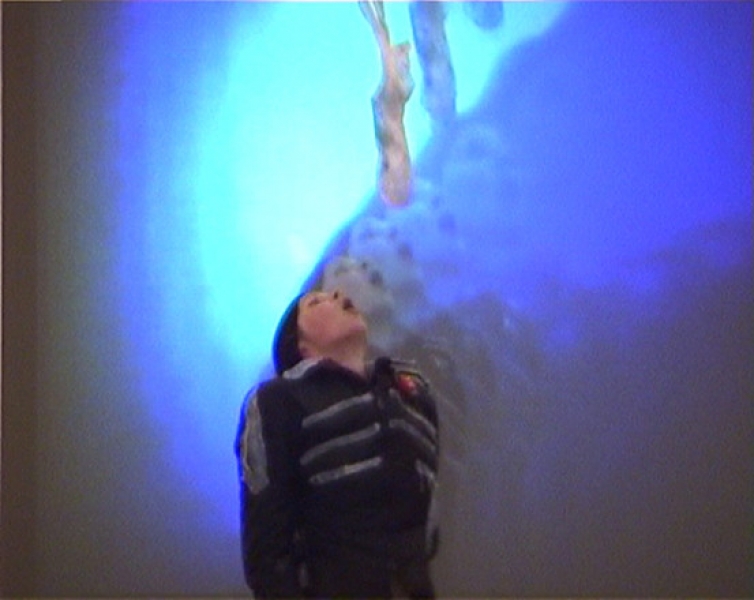 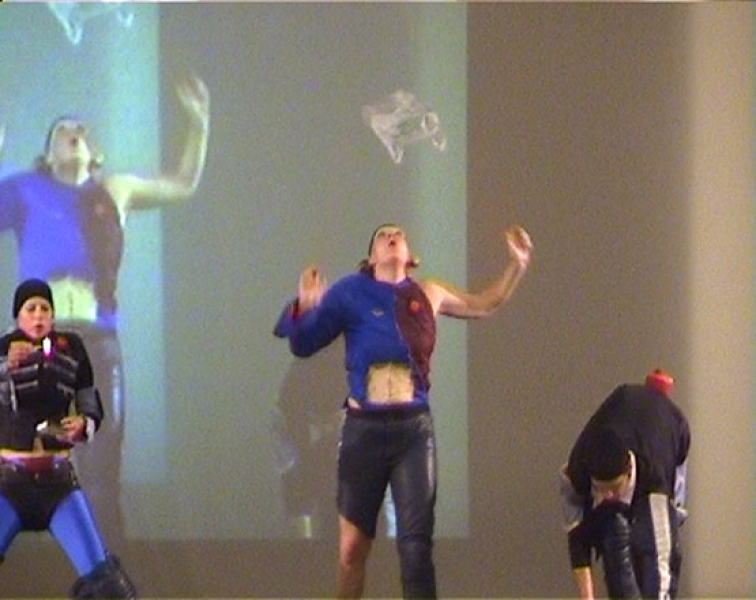 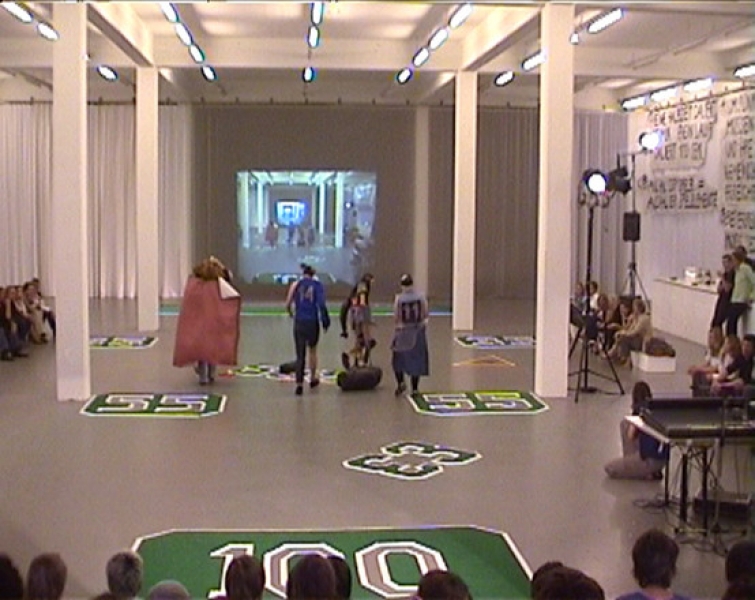 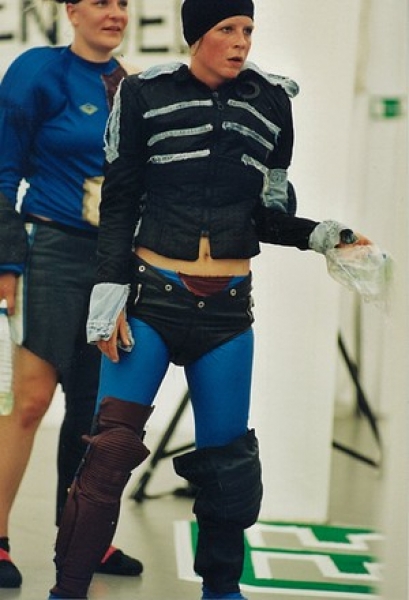 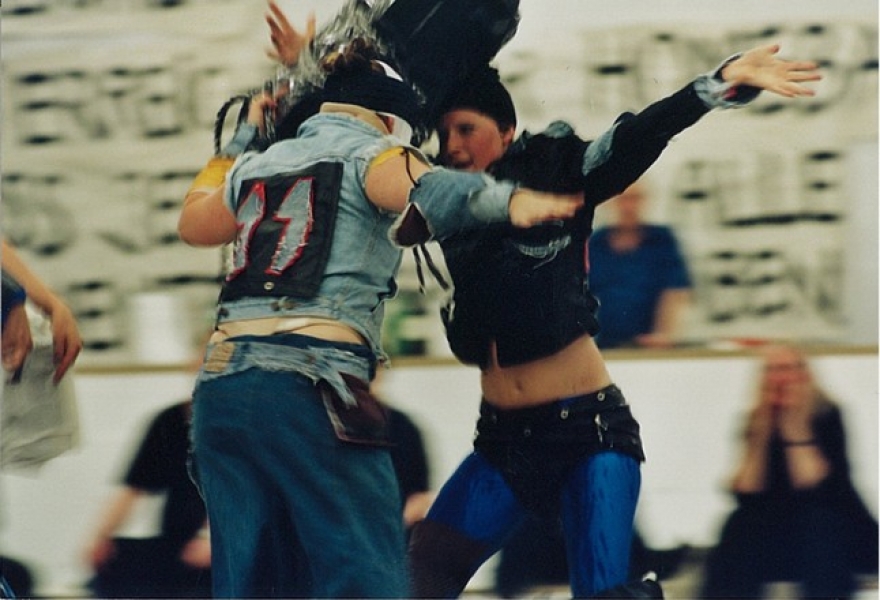 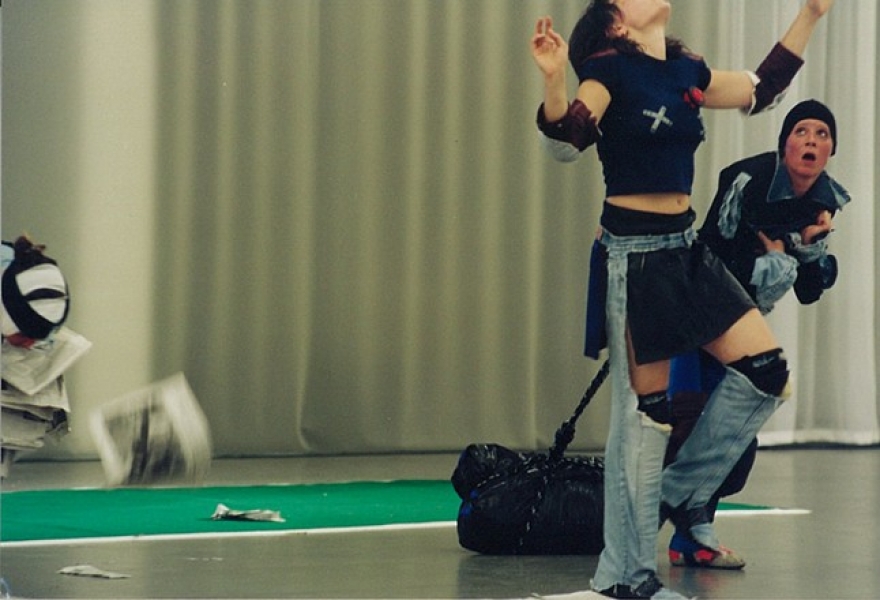 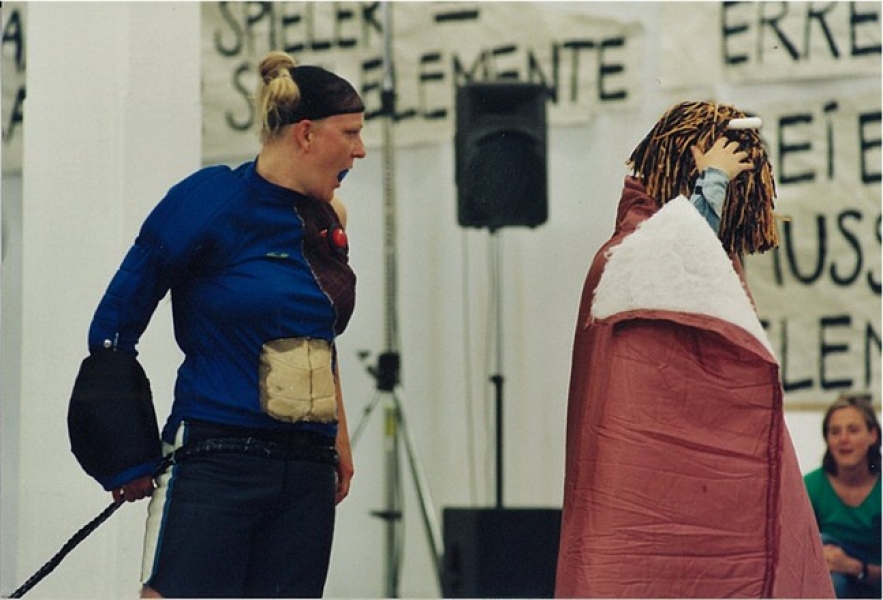 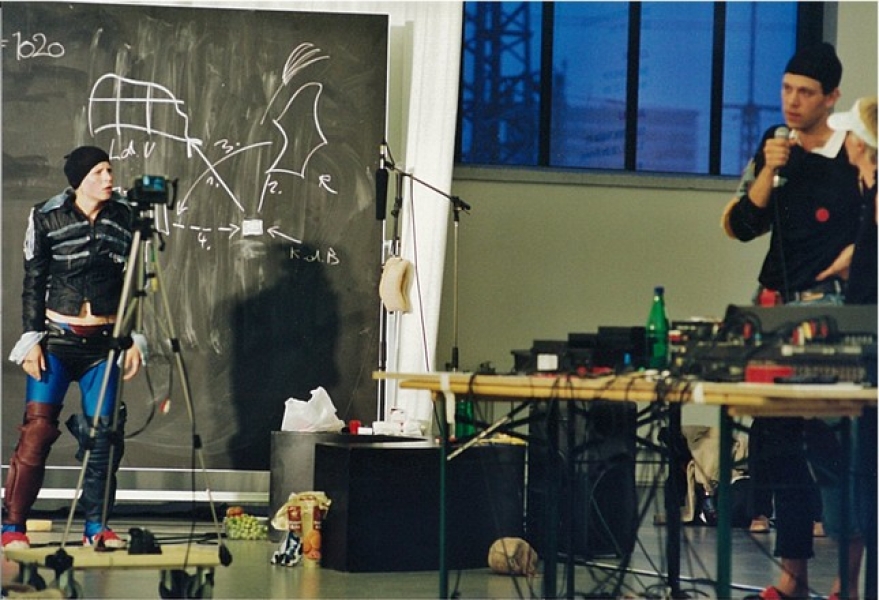 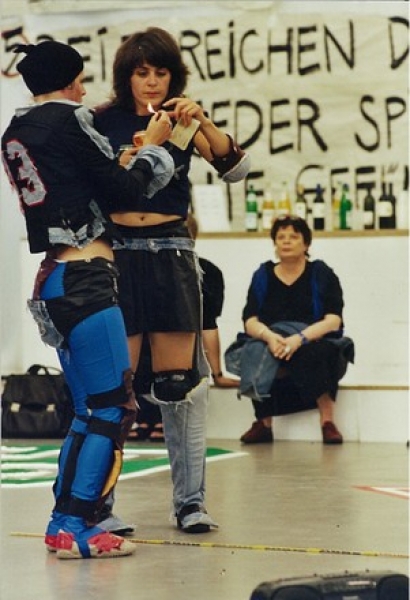 Rules – Extra Time is a game where a team lines up to play against itself. It is a set of rules designed to introduce chaos into a structure and structure into chaos. These rules are to be followed. These rules are to be mastered. These rules are to be excelled and to be endlessly expanded. Caught in a vicious circle of hope, breakthrough, crisis and balance, She She Pop try to master their collective strength and organize as a successful team.
Rules – Extra Time is an athletic event consisting of extra times, periodically interrupted by short breaks, interviews with experts and great emotional pep talks. During a time of play, the performers have to cross the pitch again and again transporting and passing different game elements into the end zone to score points. The path across the pitch is obscured and complicated by the complex pass rules of the game elements. In their grand, yet pathetic names and various combinations, these game elements express the vain hope for a universal formula for success. Can the “Bitter Water Of Criticism” (1,5 litres of a poisonously green liquid) be drained without the fragile “Favour Of the Audience” (an airborne plastic bag) sinking to the floor or the “Fire Of Inspiration” (a match) going out? And in the meantime, who carries the “Burden Of Responsibility” (75 kg)? On an endless search for the decisive move, for the brilliant, irresistible combination, the team members of She She Pop try to perfect their skills in a sport with a book of rules that elaborates with each new round. Only one thing is definite: this game can only be won by efficient collaboration. So, She She Pop takes to any old emotional formula and heart-wringing song to put everyone to the common cause. New strategies are being conjured and dismissed, tricks tried, arrangements are made and again the performers rush on. They urge each other on to go beyond their own limits, to finish each other off and to exchange exhausted players. The spectators take part in this process like a sports audience: mocking bad players, cheering a score or calling for new game elements. In the course of the game they will become experts at Rules and the team will try to recruit new players from the audience and renew their strength.
Rules – a curtsy to fate and the mysterious patterns of the game, a desperate homage to the productive collective.

“….while RULES is a very funny crossover of sports, work psychology and gender trouble, it also shows the tragic elements which makes a theatre performance an experience, even a piece of art.”
Tom Mustroph in Theater der Zeit, June 2001