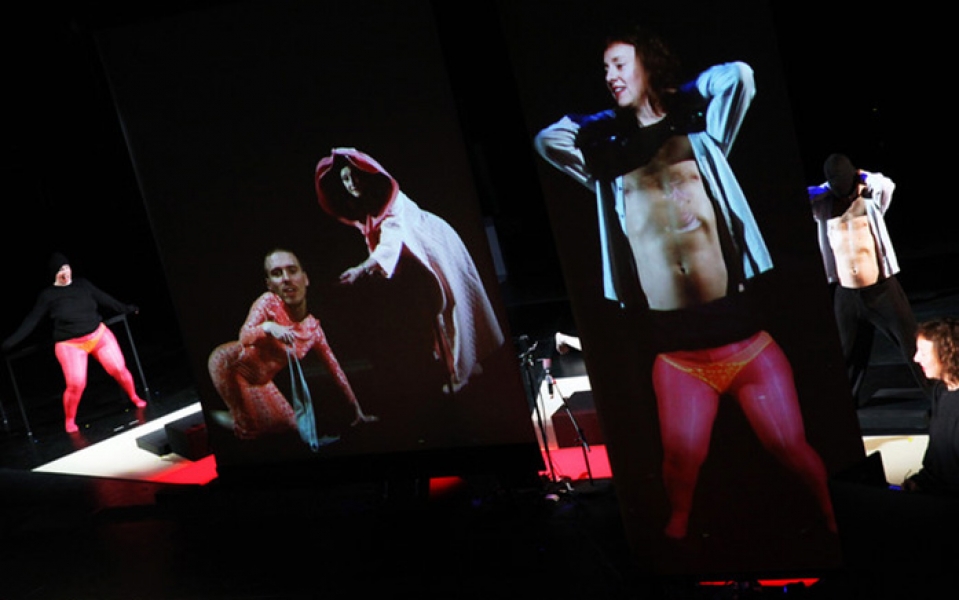 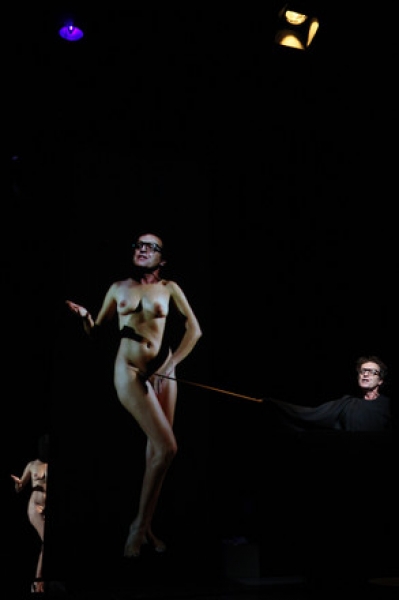 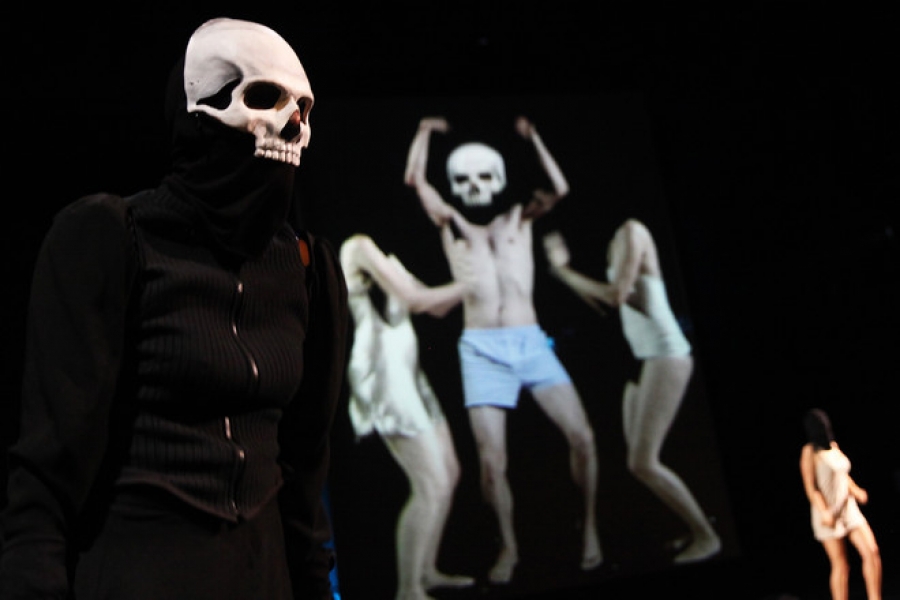 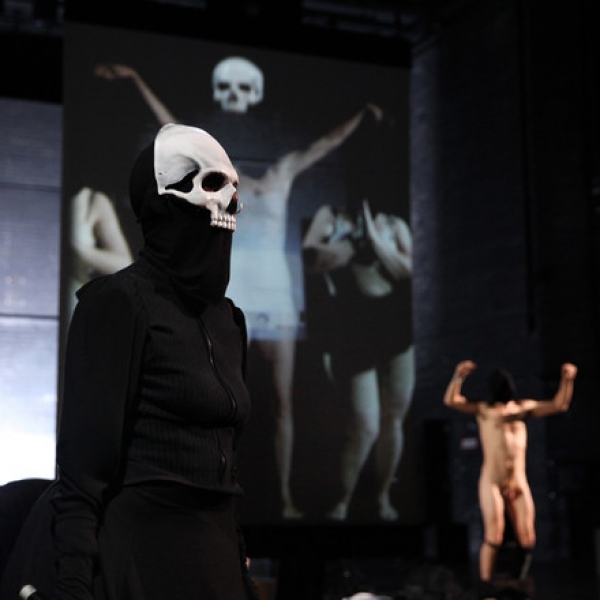 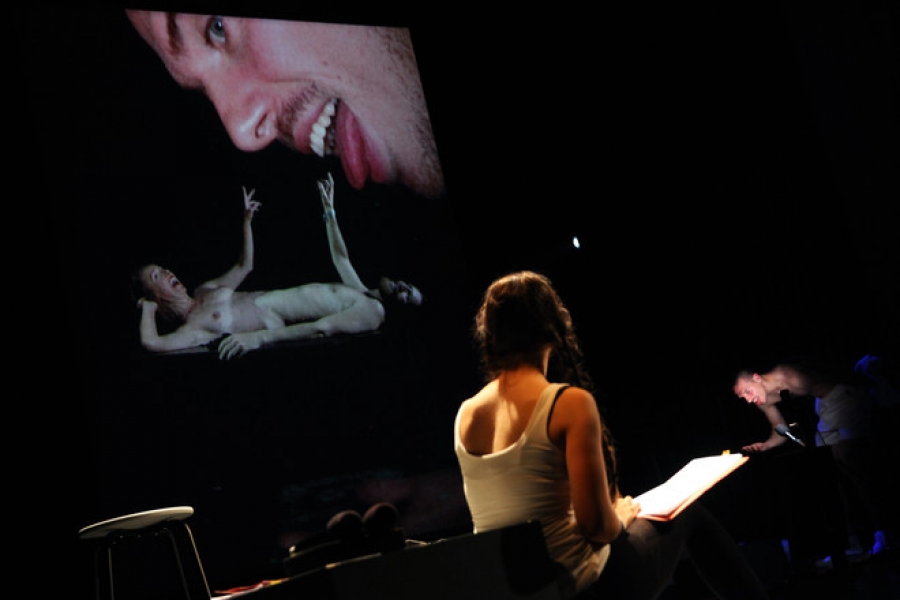 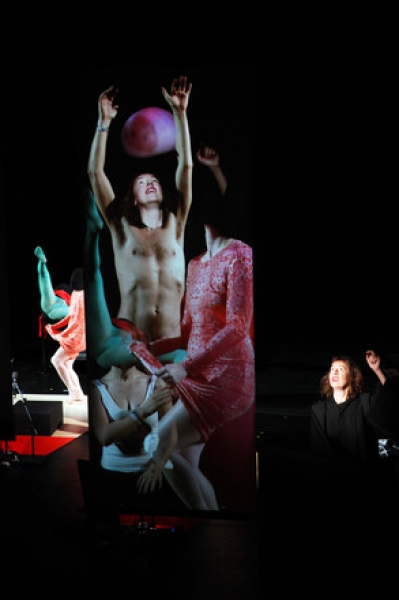 After its premiere last March in Munich, She She Pop are now showing a new version of their picture album inspired by Wedekind’s Spring Awakening and E.L. James’ erotic novel 50 Shades of Grey with older, younger and very young guests from the Berlin dance, performance and theatre scene. Based on Wedekind’s utopian models of education, the stage here serves as an educational institution and She She Pop and their guests form a faculty within it.
On two large panels onto which cross-fade images are projected, the different actors – old and young, children, women and men – are staged in a series of encounters. Through monstrous or simple presentations, and constantly shifting poses, different generations and genders, real bodies and fantastic figments expose. The experienced elderly stand next to innocent youth, or vice versa: no position is secure and nobody has reliable knowledge.
The experience of sex is constantly changing – it is historical, political, biographical, and conditioned by specific contexts. Even the most private declarations about desire, reproduction, gender specificity, and so on, are ideologies; they are smoke and mirrors, banal, dull or fictitious. Imparting knowledge is a form of penetration, just one kind of lewd sex game among many. Yet despite all these doubt and unease, sex education is still necessary. What is sex? What makes a woman a woman? What makes a man a man? What does a child know? The pan-generational teachers in 50 Grades of Shame rises to this challenge. The performers use their bodies and their accumulated physical shame as visual material.
50 Grades of Shame is concerned with creating, viewing, modifying and reinterpreting imagery: images in the form of ideals and norms, images of collective and individual desire, images as concrete examples, and as pornography, caricature and subversive collage. Together with their guests, She She Pop’s performers are working on a new theatrical format. The aim is to abandon the individual limits of the body, age, gender, shame and hard-won sexual identity in order to merge into new, collective image of bodies, live on camera. Each and every one of us, whether old or young, is naive despite all our experience, and has to teach others. Each and every one of us can imitate, parody and penetrate the other. The result is an ars erotica for the stage – a fusion of modern sex-education picture book and late medieval dance of death.

A production by She She Pop and Münchner Kammerspiele in co-production with HAU Hebbel am Ufer Berlin, Kampnagel Hamburg, FFT Düsseldorf, Künstlerhaus Mousonturm Frankfurt a.M. and Kyoto Experiment.

Funded by the Berlin Senate Chancellery for Cultural Affairs and supported within the framework of the Alliance of International Production Houses by the Federal Government Commissioner for Culture and the Media.

She She Pop: 50 Grades of Shame (Trailer) from She She Pop on Vimeo.

50 Grades of Shame is a series of images (…) that creates a wild album of possibilities on stage. Naked and clothed body parts are recorded by cameras on two screens and reassembled like a flip book for children to make funny people or to piece together animals. The possibilities are infinite because men and women of different ages and acting styles perform on stage. They all provide the legs, bellies, breasts and busts for the screens. Below, the figure stands on thin legs, wearing a pot belly with huge breasts and on top is a man’s head with a long beard. Then pow! – it all changes again. The breast hovers like a moon over the torso and so on… In the most poetic moments, the corresponding images on the screen meet, then kiss intimately and passionately…
Frankfurter Rundschau, 11.11.2016

Reviews of the premiere in Berlin, October 2016

She She Pop’s leitmotif – the circulation of body parts – is no random gender concept, but rather a precise equation of images with the narratives of agitation, violence and moral projection. They claim more than the simple mere existence of “social gender”, but rather offer a complex series of images for the distressing ways that society and nature are mutually entwined.
Doris Meierheinirch, Berliner Zeitung, 20.10.2016

Reviews of the premiere in Munich, March 2016

The action on stage switches between pulpit sermons, scenes from Wedekind’s drama, chalk-and-talk teaching and role plays. But there are no fixed roles for the actors (featuring Anna Drexler, Walter Hess and 16-year-old Lilli Biedermann, a ‘real teenager’). On large video screens, the bodies of the performers constantly blend into striking new constellations, as if the collective body is a new utopia. This highly entertaining evening garnered much cheering, long applause and an isolated boo…
Die Welt, 4.3.2016

She She Pop’s take on the term ‘shame’ remains ambiguous, and doesn’t have only negative connotations. Above all, the ‘pornographication’ of our society goes hand in hand with an obsession for physical perfection. In 50 Grades of Shame, the cult of the body is thwarted, and the body itself is presented as a construct. On two screens, live video images of individual performers’ heads are mounted onto the bodies of others to form “patchwork people”: Christian Löber strikes the laid-back pose of womanizer Christian Grey from the James novels, but the face belongs to Anna Drexler. Hermaphrodite images merge naked breasts and swinging penises. The head of 77-year-old Walter Hess is morphed onto Berit Stumpf’s naked body. Indeed, the She She Pop performers usher a ‘nudist pleasure’ into the Münchener Kammerspiele. It’s tempting to call it ‘shameless’. But the lack of embarrassment among the audience is thanks to the irony that goes hand in hand with this unsparing, unadorned display of bodies. A shamelessly enjoyable evening.

Soon clothes sashay across men’s bellies, and male heads are stuck on female bodies with naked breasts. Confusion ensues, a dissolution of gender roles and pseudo-certainties, simple and striking, witty and effective in equal measure. And then points of view are skewed: proportions and body parts are projected into and onto each other, sometimes with monstrous results, such as Walter Hessen’s head growing out of a female body. Or they become bizarrely utopian, as in when Berit Stumpf and Sebastian Bark’s conjoined torsos start to caress each other. At the side of the stage Santiago Blum creates a musical crescendo that is both muffled and shrill – a lustful inferno. Meanwhile, Lilli Biedermann reads from Hänschen Rilow’s masturbation scene in Wedekind’s play, who in turn fervently cites Othello.
Tim Slagman, nachtkritik, 4.3.2016

This collection of curios featuring flip-effect images of bodies is shattering, frightening, amazing and funny. Strange fantasy creatures come to life, such as when two torsos lying on the backs fuse at the waist; or when the projection of two fingers on a larger-than-life hand depict an abdomen. These tableaux vivants – visual explosions of our inner selves – offer insight into what is physically conceivable between heaven and earth, and between bodies, regardless of gender. The breaches and gulfs in our feelings of shame are displayed. And they are heightened by embarrassing, even trashy costume designs (Lea Søvsø). On this insane catwalk of our emotions and fantasies, which is the opposite of Heidi Klum’s calamitous concern with appearances, a wonderful, humorous Dada effect is created that runs counter to the insanity of rigid physical ideals and self-optimisation. The effects of She She Pop’s show continue to linger at home. Standing in front of the mirror, I ask myself, both aghast and cheerful: “Is this me? And if so, why?”
K. Erik Franzen, Frankfurter Rundschau, 7.3.2016