The DEMOCRATIC BOOTCAMP project, initiated by EUCREA, grows out of the conviction that the knowledge of collectives in the performing arts urgently needs to be collected, the experiences exchanged, subjected to a performative practical test and brought into society in the form of a nationwide gathering. The research, which lasted almost six months, culminated in a large performative show (DIE SHOW) as well as an open symposium (DAS TRAININGSLAGER)

She She Pop will be represented together with the group “I can be your Translator”.

Further information and tickets at www.kampnagel.de and www.eucrea.de.
, Kampnagel, Hamburg

As a mental extension of Drawers, She She Pop has once again invited various guests to share the stage or be connected virtually in their new production, Walls. Together, they travel through time to past moments and possible futures. The journey takes the audience along walls that permeate how we perceive shared reality and its emotional impact. 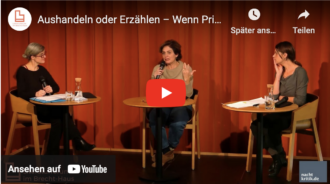 Ilia Papatheodorou was a guest in the discussion series “Streitfall Drama” and discusses with director and writer Anne Habermehl about working with biographical material. The conversation is presented by Nachtkritik and the Literaturforum im Brecht-Haus and was moderated by Elena Philipp.
Click here for the video on demand or the podcast.

The Summer Camp Academy is organized in collaboration with Komuna/Warszawa, La Comedie de Clermont Ferrand and the Epidaurus Festival in Athens as part of Creative Europe’s project “In Search of a Home – Ithaca”.

This She She Pop Workshop was funded by Fonds Darstellende Künste with funds from the Federal Government Commissioner for Culture and the Media as part of “NEUSTART KULTUR.”