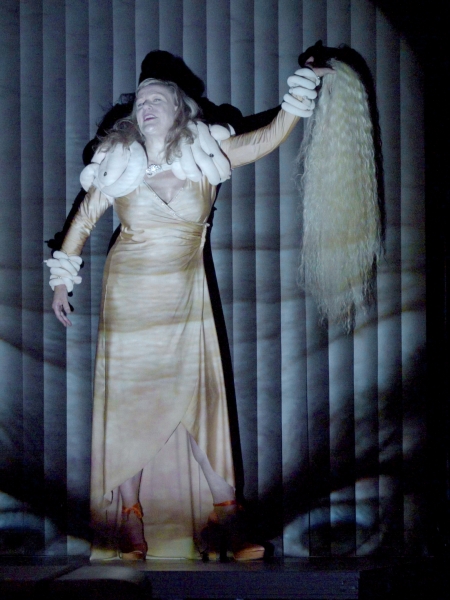 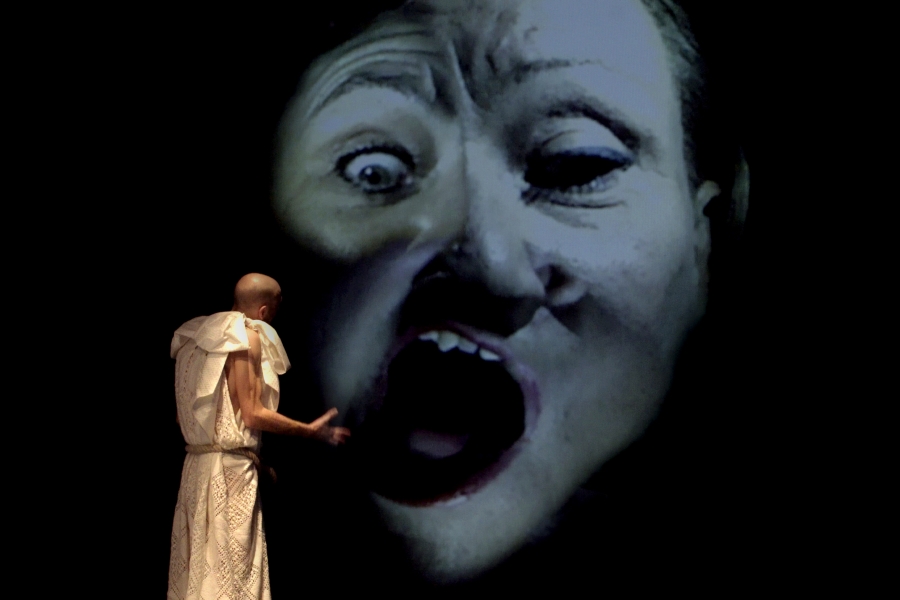 Foto: Gernot Wöltjen
In 1962 the film Whatever Happened to Baby Jane was released into the cinemas. The psycho-horror thriller about two ageing female movie stars was a surprising hit and kicked off a whole new film genre known as the ‘psycho biddy’ or ‘hagsploitation’ movie. The film diva steps in front of the mirror in a studied pose, sees her aged face – a distorted version of how she sees herself – and lets out into a blood-curdling scream. This has become an iconic image.

This year, the members of She She Pop will all be about 50. And so, they explore society’s fear of the ‘hag’ – the old woman and witch – in their new production Hexploitation. Naturally, they will be using their ageing bodies for this purpose: to fight against the invisibility and loss of status that women suffer in society when they are no longer of childbearing age. To this day, the term ‘witch’ is used to belittle or reduce women. The witch – an anarchic, heretical woman – stands for sexuality beyond reproduction and subversive behaviour towards power structures and authorities.

In Hexploitation, She She Pop lock themselves and the audience in a mise en scène reminiscent of a low-lit, kitschy film set from which there is no escape. A live camera serves as a magnifying glass and intimate examining tool. With its help, the She She Pop team, in the guise of ageing psycho biddies, explore their own disturbing imperfections and obsessions, go in search of taboos and examine traditional witchcraft. They also discover the camera as a magic box through which they can repeatedly transcend their bodies to create liberating self-portraits, coupled with melodramatic disgust and comical lust, reminiscent of Norma Desmond’s memorable line: ‘Mr DeMille, I’m ready for my close-up!’ (Sunset Boulevard, 1950).

“Like fresh teenagers on a self-awareness course, four members of the She She Pop team (Johanna Freiburg, Berit Stumpf, Mieke Matzke, Sebastian Bark at the premiere) sit half-naked on stage, looking at their genitals with mirrors. The time is ripe for them to take a good look at their bodies again, which they do right from the start with a touch of delightful intimacy lacking any embarrassment. (…) (…) All is revealed. The show examines issues of getting thinner or fatter, age spots and wrinkles, spare tyres and period blood. The performers do a self-deprecating survey which, by the end, has become a fantastic She She Pop spectacle (…)
(…) In one of the best scenes, separate body parts are assembled on the video screen. For example, a head becomes a belly or Sebastian Bark crawls out from a women’s pubis like during birth. It’s a show wonderfully self-mocking images about gender, in a cinematic transformation that lands punches and teases every which way. (…)”
Simone Kaempf, nachtkritik, 19.09.2020

“Not only wrinkles and belly fat are shown, but close-ups of a woman’s pubis are projected onto the set and quickly distorted in fast succession. Body parts and faces connect while the history of witch-hunts is discussed or the performers discuss menstruation, the female body in capitalism and bodily self-image. “Is it the spotlights or am I just having a hot flash?” asks Berit Stumpf at one point. The evening, which lasts just seventy minutes, is a post-dramatic tour de force, joyous, funny and feisty. (..)(…) They question and film each other, set challenges, concoct artificial menstrual blood for the man in their team and keep raising the stakes until, in a rapturous finale, the old tropes are abolished. Loyalty to the male gaze, which reduces women who can no longer have children to witches, is renounced. (…) The effect is electrifying, and the audience ends up bewitched, bothered and bewildered.”
André Mumot, Deutschlandfunk Kultur, 19.09.2020

“The fact that this neither seems pornographic or provocative, but just a natural part of intimate research, is down to the group’s tongue-in-cheek performance. Nothing about this show is uptight or exhibitionistic. (…) (…) it is a highly self-deprecating mixture of horror film and witches’ kitchen. (…) It is (…)[the] intimacy, the light-heartedness and the humour that touch you.” Barbara Behrendt, Inforadio RBB Kultur, 19.09.2020 “A body is never just a body, least of all when it is female. And this is why Hexploitation primarily consists of the performers beating their way through the tangle of male-dominated tropes of the Other, as well as myths and manipulations that classify the female body and render it available. Persistent diagnoses of irritability during the menopause, for example, which Mieke Matzke presents in a lecturer’s tone, are countered by the performers’ radically unemotional, cold view of their genital anatomy. (…) Hexploitation (…) takes you by surprise with its completely unashamed radicalism.”
Doris Meierhenrich, Berliner Zeitung, 21.09.2020

“(…) Most of the scenes are performed throughout in an open bathrobe or completely naked. This does not break any aesthetic conventions, but points to the fact that spaces and roles for women over 50 are dwindling, not least in the cultural sector. The menopause is a metaphor for invalidation. And it’s about women’s bare existence. She She Pop celebrate the attempt to break away from this age-old trope of withering femininity in a cool film-studio setting. Here, video artist Benjamin Krieg creates a striking visual layer with his own narrative: he shows close-ups of vulvas, which sometimes take up the entire theatre in a carousel of images, and morphs the faces of the performers into each other, as well as other clever cross-fades (…).”
Patrick Wildermann, Tagesspiegel, 21.09.20

“(…) The show is a potent mixture of witches’ sabbath and a discourse on exploitation, which, as is customary in She She Pop, finds its roots in the group’s radical exhibitionism, but almost immediately spills over into a comprehensive structural analysis that spans decades. In the witches’ cauldron, we find the pathologised woman of around fifty; medical research, which orients its drugs on men’s organisms; an armada of misogynistic poets and thinkers (such as Rainer Maria Rilke and “The Faded One”) alongside many other wicked things, combined with unsparing close-ups of fleshy folds, drooping breasts and the members’ thinning hair. Those who scream “authenticity” here must also scream “ironic twist”, because the much-maligned concept of authenticity is, as always in She She Pop’s work, skilfully undermined in this lecture-performance that combines text, music (Santiago Blaum), video (Benjamin Krieg) and outlandish costumes (Lea Søvsø).”
Dorte Lena Eilers, Theater der Zeit, 1/2021

“(…) She She Pop declares war on the patriarchs of this world and then belt out Lana Del Rey’s “Young and Beautiful”, in which being “young” and “beautiful” happen not to be requirements for a worthwhile life. Now, if not sooner, it is clear that the group understands female issues without falling into heavy-handed activism. Because this is not a moralising show. It considers its subject realistically in the context of culture and pop-culture, initiating a self-healing process with its open display of bodies and self-doubt, of which many fashionably feminist theatre professionals can only dream.”
Anna Fastabend, Theater heute, Oktober 2020