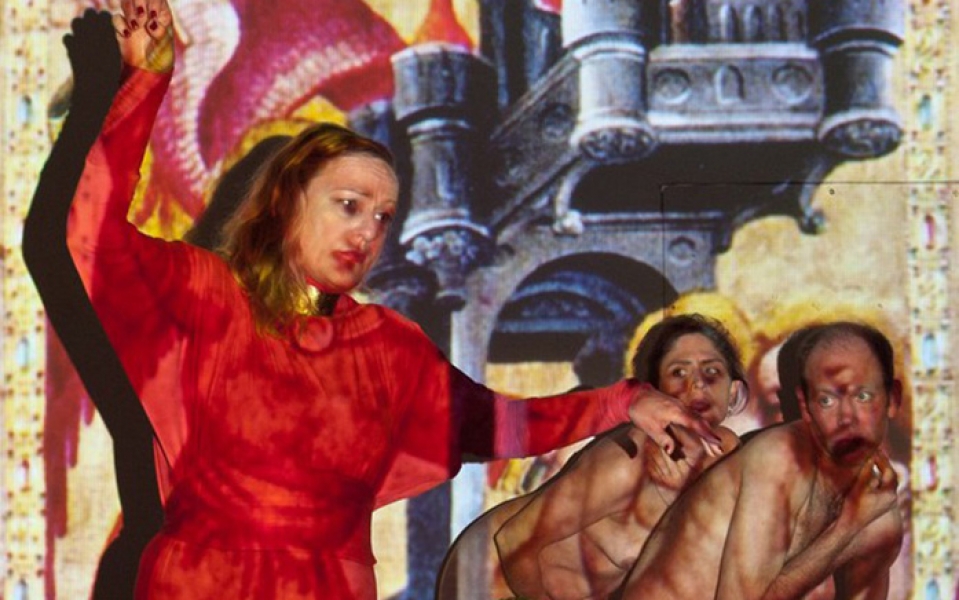 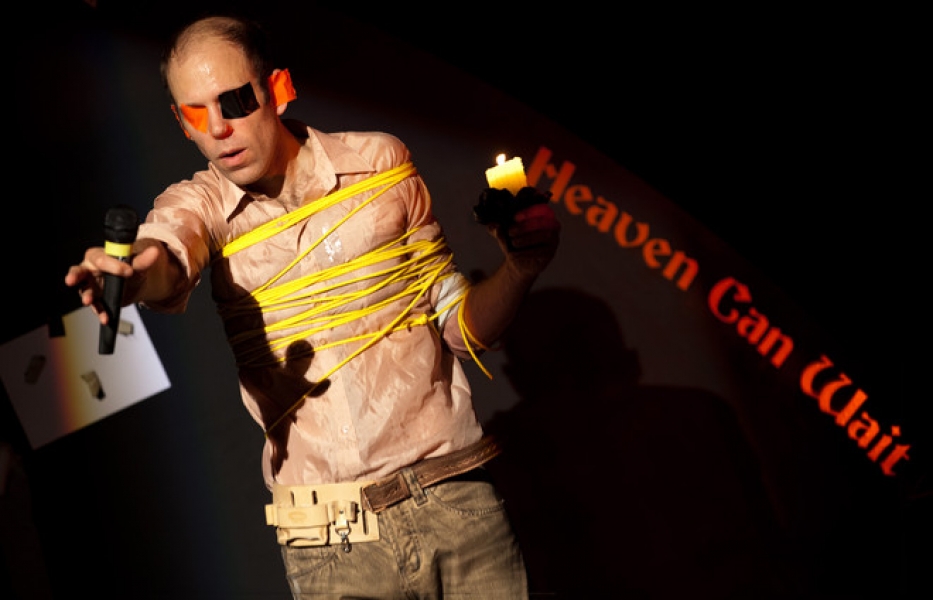 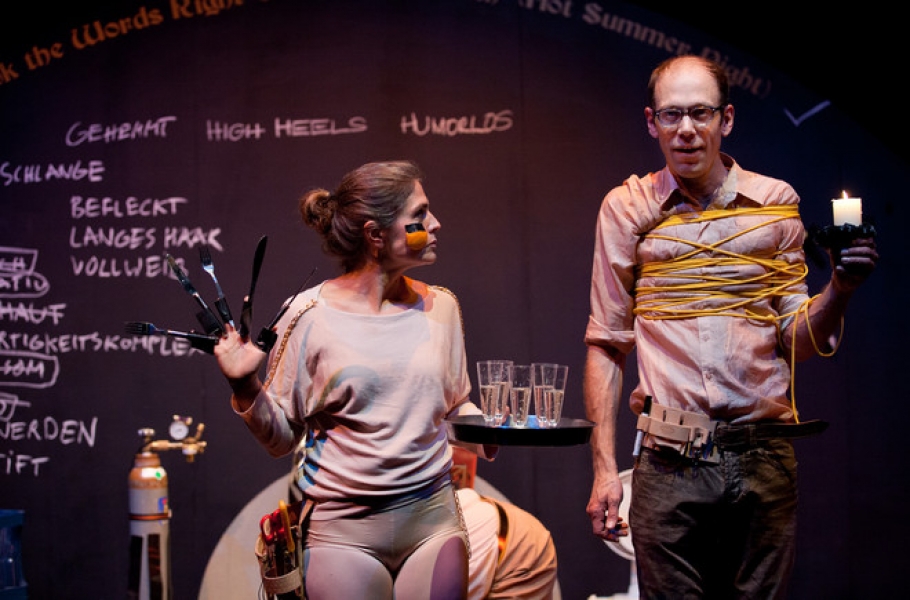 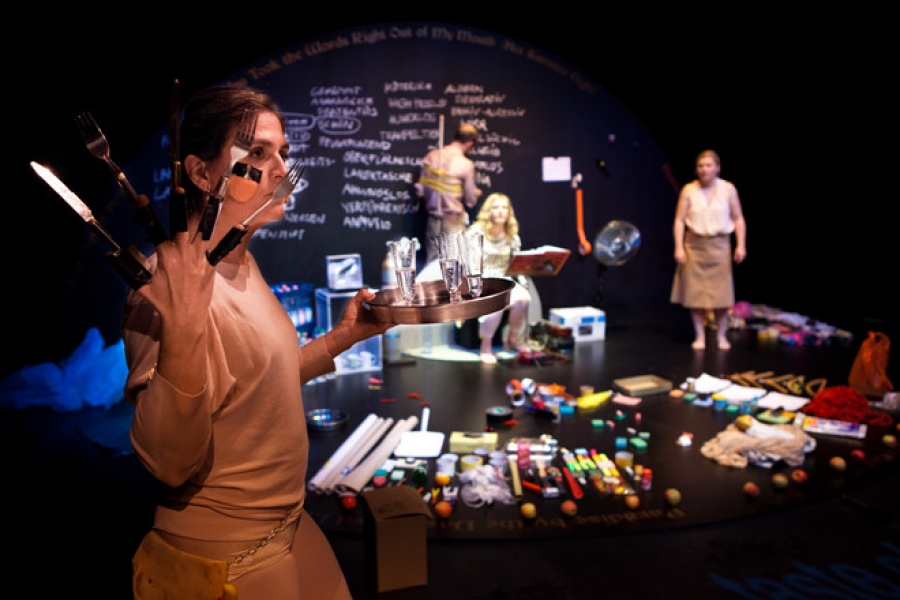 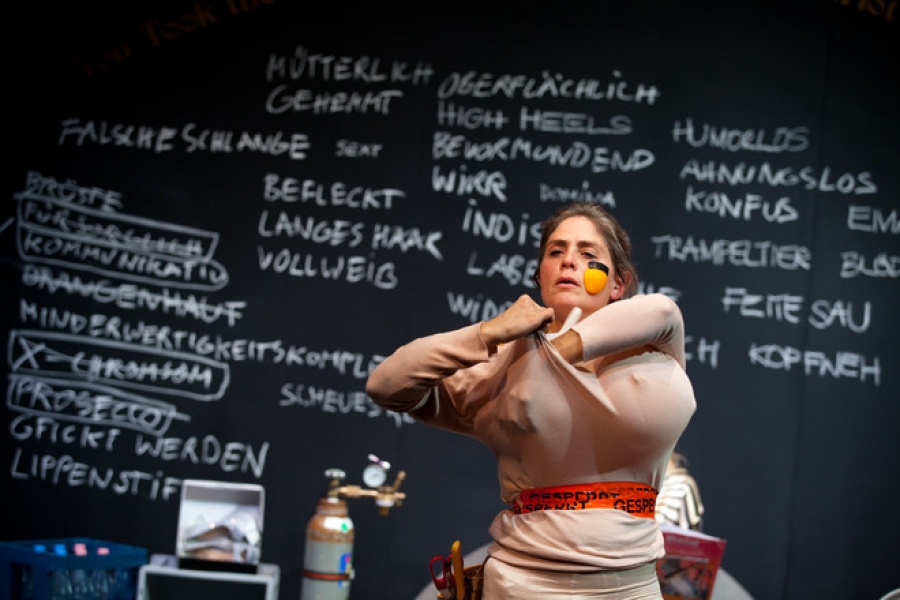 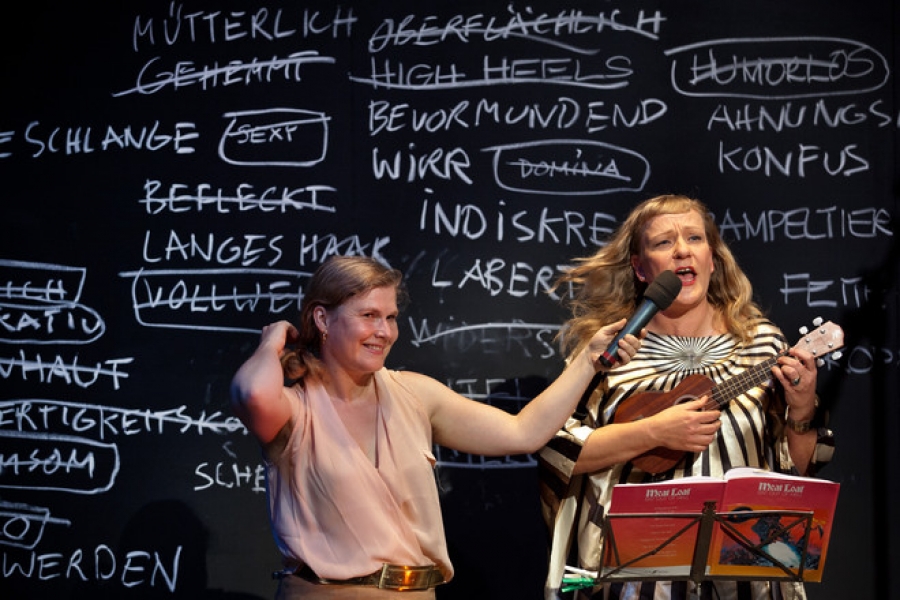 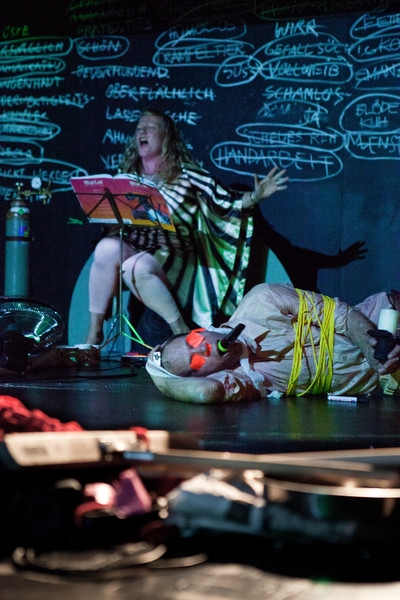 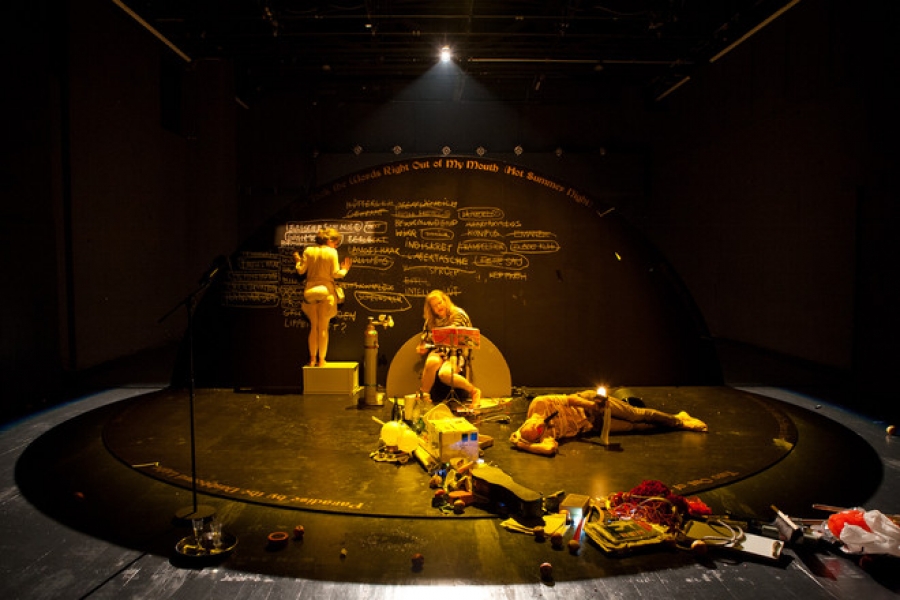 Foto: Benjamin Krieg
What is that, where does it belong? This key question posed by every cleaning lady there ever was also precedes the creation of the world. As God begins to give names to creatures and things and ascribes to each his place, order and peace gradually emerge from the chaos: the beginning of the end.
The performance Ende unfolds along the lines of the biblical story of genesis. She She Pop assume the pre-described roles of God, man, Eve, the animals, the plants and the cherubim. The stage is the paradise in which the performers experiment with bringing things to an end, cleaning up, stopping, interrupting, cut, silence, conclusion. One of them will relieve herself of all (self-)images, which the reigning order (to which she belongs) have formed of her sex. She wants to destroy ‘the female image’ based on her own. Will her sex continue to exist at all, if she ceases to represent it?
One of the performers will stifle all perspectives that present themselves, all opportunities for action in a staggering act of self-constraint and force himself into a state of vegetative abandon. A third performer searches for the final order of all things, the perfect pattern – only to then close the doors behind herself for ever.
She She Pop converge on the precipice of the end, that precious moment containing the possibility of something else: a new book, a different partner, a new model of society, a better drink. The heavenly hosts will accompany the action with a very personal swan song from Meat Loaf’s album ‘Bat Out of Hell’.

A Coproduction of She She Pop, HAU Hebbel am Ufer and Forum Freies Theater Düsseldorf.

Funded by the City of Berlin and the Fonds Darstellende Künste e.V.

On Sunday, the nationally celebrated theater group She She Pop invigorated Schwankhalle Bremen with their virtuously independent theatrical craftspersonship. An allusion-rich piece of discursive theater, where everything is full of significance and rather funny. Sven Garbade, Weser-Kurier, 14.09.2015

“Ende” – is the title of this fantastic new piece by She She Pop, now running at the co-producing venue FFT after premiering in Berlin. The story of creation – seven days, light and darkness – is what three women and a man use to hold their production together. They search of the end of the beginning. This is sometimes witty, self-deprecating, sometimes ironic and laconic, very inventive and always to the point. The way, in which they play with theatrical means, perform them and simultaneously allow them to take effect, is great art. Femininity is a hard currency. Only no one has the time to find out, who profits from it”, says Papatheodorou. Meanwhile, Lisa Lucassen slaves away at Meat Loaf’s album “Bat Out of Hell”. Music, which she heard once too often sitting in front of her brother’s record player. She sings the seven songs one after another and then checks them off a list. “It’s not always nice”, she says. But it is highly entertaining the way she interprets the oozing pathos of these heaven and hell songs with no more than a ukulele. And then there is God aka Mieke Matzke, who attempts to recreate some form of order out of the chaos, the “primordial soup” of duct tape, paper, coat hangers, trash bags, apples and water crates spread across the stage. A touching and deeply human struggle.
Marion Troja, Westdeutsche Zeitung, 25.01.2014

Reviews of the premiere 2013

…That is what this intelligent piece of art is about: It does not celebrate the act of creation, the allegedly genuine and positive challenge of man. It is about the moment after. What happens when something is brought to the world – but will not disappear from it anymore? One thinks of the concept of money or the invention of plastic. Creations that will probably never find an ending. To create something, She She Pop say, is not only an achievement. It is also a responsibility. An idea one should think about more often. Not only in art.
Andrea Heinz, DIE ZEIT, 17.10.2013

…a subtle composition of everyday life and existential moments, the biografical and the fundamental, earnest and wit, humor and pessimism…
Elisabeth Nehring, Deutschlandradio, 08.10.2013

And thus, we come to the She She Pop charm of the evening: the flying splice of the four performers between private person and the performer personality, between ego trip and parlor game.
Sophie Diesselhorst, nachtkritik.de, 08.10.2013